Back to world map

In Portugal, euthanasia and assisted suicide are forbidden by their Penal Code.
In 2020 however, 5 bills about legal assisted dying, including euthanasia, were approved by Portugese Parliament.
These were merged into one bill, and on the 29th of January 2021 this bill is approved by Parliament. Now it is up to the the President of the Republic, Marcelo Rebelo de Sousa, to approve the bill or demand further parliamentary or judicial review. This could be the case if he believes the law infringes Portugal’s constitution, which states “human life is inviolable”.

The merged bill about medically assisted death provides that a person can request medically assisted death or euthanasia.
The person’s will should be current and reiterated, serious, free and enlightened.
And the person should be in a situation of intolerable suffering, with definitive injury of extreme severity according to scientific consensus or incurable and fatal disease.
In these cases, euthanasia “is not legally punishable when practiced or helped by health professionals”.

Article 134 of the Penal Code forbids murder at request (euthanasia).
The punishment for it is up to three years.
Also an attempt is punishable.

Article 135 of the Penal Code forbids  assisted suicide.
The punishment for it is up to three years.
If the person to whom he is providing help is under 16 years of age or has no ability to value or determine his own interests, the agent shall be punished with imprisonment from 1 to 5 years.

Right to Die Societies in Portugal 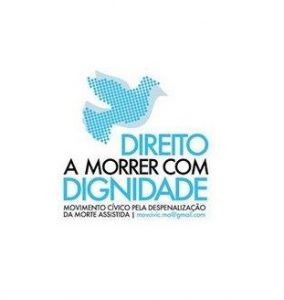 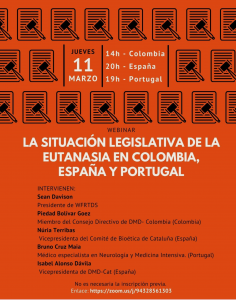 March 11: Webinar on euthanasia in Colombia, Spain and Portugal

WFRtDS and DMD-Spain would like to invite you to the Spanish webinar “The legislative situation regarding euthanasia in Colombia, Spain and Portugal” Date: Thursday, March 11thTime: 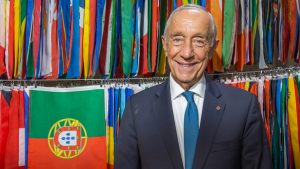 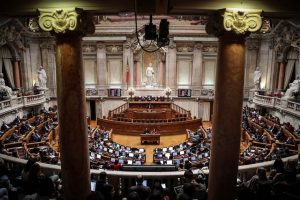 On February 20, five bills about euthanasia are approved by the Portugese Parliament.  The content of the bills Euthanasia becomes possible in the case of

On Thursday 30 January, Portugal’s Parliament agreed to debate on the decriminalization of physician-assisted death in their country. A bill to allow euthanasia and assisted suicide will