The 2021 General Assembly will take place at Saturday November 27.
The assembly is divided over two seperate meetings: one in the morning (08.00 UTC) and one in the evening (17.00 UTC).
In order to be able to really start at the planned time, you may start joining the meeting from 15 minutes before. The meeting will close ultimately after 90 minutes from the start.
Minutes of this meeting will be made and later be assembled with the minutes of the other meeting; the same applies for the election and possible other votes.

For your convenience see here the time table for the different regions:

List of Decisions GA
• The minutes of the 2016 Delegates Meeting were approved.
• Interim Membership of Vita Perfecta is continued until clarification is obtained
• End of Life Washington (USA), Lífsvirðing (Iceland), DMD Portugal, DMD Catalunya (Spain) were granted full membership.
• EXIT International was granted full membership with one abstention and one vote against.
• Secretary and Treasurer’s reports – according to positive feedback from auditor – were approved.
• Budget 2018-2020 is approved. Membership fee will be maintained at the present level.
• Motion 1 from Dignitas (concerning suicide prevention as part of RtD Societies scope of work) not supported.
• Motion 2 from Dignitas (concerning a lawyers’ network) was approved, with the request to the Committee to implement this in the vision/mission documents.
• The implementation of a category of Supporters (individual membership) was approved, the formulation of a new article in the Statutes included.
• The Committee will finalize the work done in earlier periods on the formulation of Vision and Mission, circulate the results to the membership before finally approving it in preparation for next GA.
• Suggested amendments of Statutes were agreed.
• Jacqueline Herremans of ADMD-B was re- appointed as Auditor for 2018-2020.
• Decision on the host of 2020 Conference will be taken on the basis of letters of interest received by end of December 2018 (from Dignitate Germany and EXIT International/LWT) and after circulation for last comment to the membership.
• GA agrees with the guideline for hosting WF Conferences with Europe and other continents in alternation.
• Committee 2018-2020 was elected as follows:
o Sean Davison (South Africa) as President
o Jean-Jacques Bise (Switzerland) as Treasurer
O Jeanne Arthur (Australia) as Secretary
o Asuncion Alvarez (Mexico)
o Masahiro Nomoto (Japan)

Since 2018 GA the following RtD Societies have applied for membership; have been granted interim membership:

Key activities considered to be Executive and/or administrative

All together these (e-mail) contacts resulted in dealing with 10 to sometimes 35 mails per day (guessed total for 2018-2021: 10.000 e-mails), and regular telephone conversations.

Due to COVID 19 pandemic this period international travel of course was limited.

category Supporters: new category of partnership, next to Membership and Associate Membership. Supporters pay a minimum annual fee, will have the same rights as members except voting rights.

After a small jumpstart, the number of applications slowed down to the current number of 21 supporters.

Due to the growing workload for the Executive Director, and the wish to professionalize the website, it was decided to refer the website management to a separate webmaster: from January 2019 Laura de Vito started as such. She supervised the full overhaul of the WF website to the current new design. She also continued the monthly updates sent to members, supporters and subscribers (total number over 1900) in a new format.

Another step was taken, when Committee and Staff decided to try and take one further step into professionalizing the WF, WF towards WF 2.0 (see GA agenda item 10) . Jane Barrett who offered to help out with this, started from January 2020 as WF Staff member at large, mainly focusing on supporting Working Groups, looking after PR,  Policy and Advocacy.

6. Report of the treasurer

As agreed during the 2018 GA, we have simplified the accounting procedure into a Receipts and Payments Account System only. 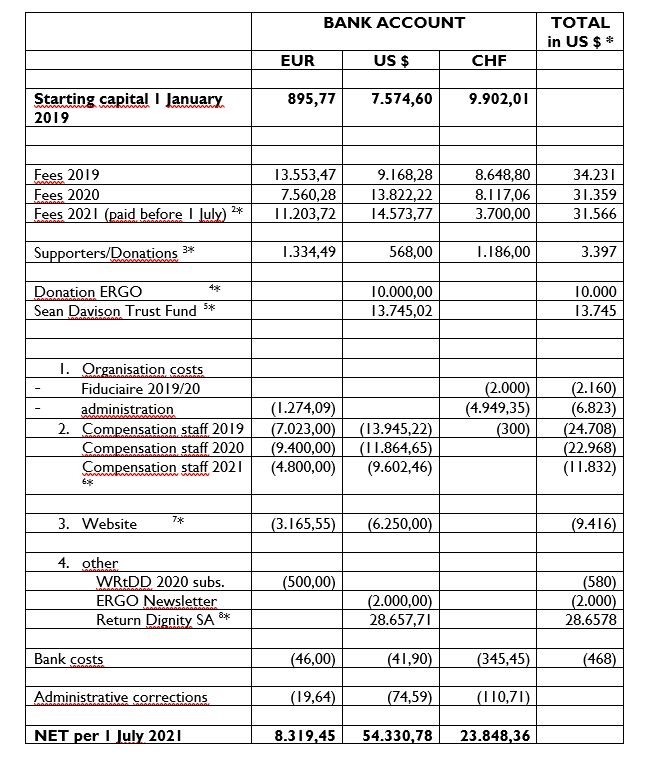 * Though for each bank account (EURO, US $ and CHF) this has been realised, we also agreed to have a summarizing column in US $: all amounts in the other columns have been translated, using a ratio  of € 1 towards US $ 1,16, and CHF 1 towards US $ 1,08

2* Regards fee payments up till 1 July; still to be received from  3 member societies

3* Since the number of supporters has not grown, it was decided to combine this with donations (via website).

4* A donation received from ERGO has been registered separately.

5* The remainder of the Sean Trust Fund was returned to WF accounts.

6* In 2019 and 2020 compensation was given to Executive Director and Webmaster, since 2021 added compensation to staff member “at large”.

8* In 2018 a loan was given to Dignity SA, to help provide for the preparations of  the 2018 Cape Town Conference. The remainder was returned in 2019

In 2020 it was decided to open a PayPal account, because of troubles some Societies were faced with when paying their fees to the WF bank in Switzerland. Apparently some countries do complicate payments to other countries or continents. PayPal promised to not complicate this.

NB Let alone the costs caused around different currencies, PayPal itself deduct an administration amount from most of the payments In the past period  this amount deducted was CHF 97  (from a total of CHF 1.983,96 received).

There are two vacancies in the Committee: one because of resignation of Jeanne Arthur in 2020. The other because of statutory stepping down of Sean Davison as President.

–       Masa Nomoto has been nominated by JSDD for another period

Till November 15 we  received two Nominations:

Since voting will regard persons, a possibility to vote anonymously will be designed.

The election will be the result of 2 separate meetings put together, the final result will be communicated shortly after the end of the GA meetings.

The budget for next year is difficult to assess in comparing it with the  realisation from    2019 – 2021.  We have tried to draft the budget as much as possible by dividing 19-21 by three.

The large difference in balance can mainly be explained by the fact that in the period 2019-2021 there was no conference. The costs for the 2022 Conference now is charged only to 1 year. 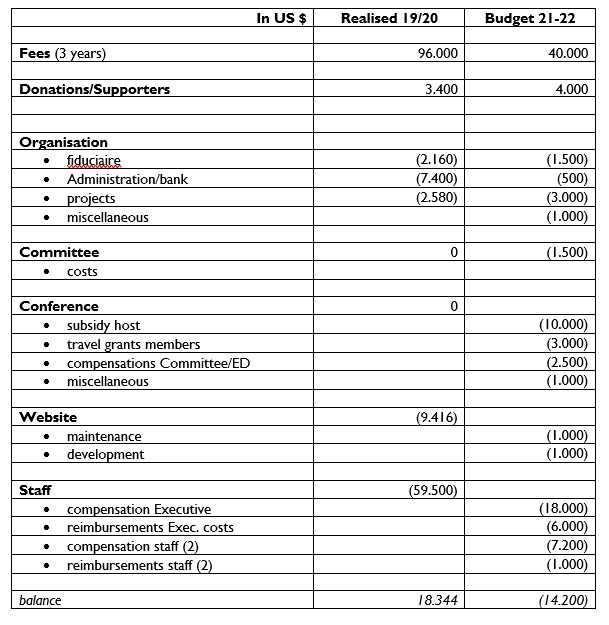 The WFRtDS Committee asked the WF Staff to develop a new policy plan for the Federation, a plan that describes a further development of WFRtDS’ mission and vision, putting emphasis on an increasing bilateral relationship between the Federation and its member Societies. Up to now, that relationship has mainly been unilateral: the Federation actively collects data from its members, archives and publishes them on the website and thus makes them available to members and website visitors looking for information; the Federation offers to facilitate more local initiatives.

In a bilateral relationship, Member organizations are active and decisive in what they require from the Federation, no longer only expecting or waiting for input from their Federation.

Such cooperation between two equal parties should lead to a professionalized Federation, enabling Member organizations to benefit more from their membership, and making greater headway in the Right to Die with Dignity locally, regionally and worldwide.

The Staff started these developments by designating three fields of attention, all three of importance to Members individually and to the WFRtDS as a whole. These fields concerned Legal Matters, Media and Advocacy.

WHAT’S BEEN HAPPENING SINCE?

A Working Group (WG) for each field was established to develop ideas and formulate proposals in favor of Member organizations individually, cooperation among members and of the Federation as a whole.

The three groups were made up of delegates from interested Member societies, and have each delivered a range of proposals (attached to this paper for information). Highlights from each are:

Some of the suggested activities have been executed by WFRtDS Staff (Rob Jonquiere, executive; Laura De Vito, webmaster; Jane Barrett, at large) during the past 18 months, in addition to their regular activities:

Throughout this process WF staff became acutely aware that this was business as usual in terms of the unilateral action of WF staff to develop ideas, discuss principles, formulate lines of thought to undertake next steps, propose them to the WF Committee and involve Member societies. Moreover, they were confronted with limitations of time as well as responsibility as a result of which the following issues arose:

It is absolutely essential to define the raison d’être (reason for existence) of the WFRtDS.

Trying to formulate policies made the Staff realize that such policy questions require Member engagement, it is their federation after all,  reflecting mature cooperation with the members.  The WF staff is in principle voluntary, with limited time available, due to other (professional) activities and jobs. Their current WF work uses most – if not all –  of their allotted time. Further development of WF 2.0 policy, requires more time for staff members, even if the responsibility issue is solved and the staff work on assignments from Members and WF Committee.

Another issue arising is a financial one. Increasing Staff activities as per the new policy cannot be achieved any longer with the currently available “forces”. Whether enlargement of the Staff will take place by attracting more volunteers, or even by  employing some Staff, implies at least larger budget for compensations, or  – when considering employment – salaries. Whatever the solution can be, a budget for such development of professionalized staff  would have to be found, partly by considering increased membership fees, or via other ways to increase budget, such as sponsoring or crowdfunding.

Central in this  issue of a new policy is the answer by the Members on the questions raised above:

CONCLUSIONS AND PROPOSAL TO THE GA

It is suggested that at the GA 2021 participating Members answer the questions, and ask the Committee to assign a project for the Staff to – in addition to continuation of their current duties and activities – develop a plan containing possible routes for implementation of a new policy, given personal and financial limitations. This plan must contain options depending on different commitments and available budgets.

After the withdrawal by Mexico of hosting the 2022 (a delayed one from 2021) Conference DWD Canada has offered to host the Conference in that year. It will be held between 2 and 6 November 2022 in Toronto, Canada.

According to the regular scheme of WF Conferences, alternating between Europe and other continents, result in a Conference  in 2024 hosted by one of our European member Societies. ADMD Luxemburg has promised to take this in consideration.

11. Appointment of the auditor

Jacqueline Herremans had offered to do the audit again next year. Does the GA consent?

Is there any other business to speak about today?